A Project of the Very Little Theatre

Theatre that creates a sense of belonging

Arbrella Luvert and Charmaine Coleman reading from Having Our Say: The Delany Sisters First 100 Years (June, 2017)

MVT, a project of The Very Little Theatre (VLT) in Eugene, OR., is designed to offer an opportunity for members of minority or marginalized communities to participate in the collaborative art of theatre as actors, writers, directors, designers, and/or audience members.

MVT’s first year (2017) was a very exciting and illuminating time. We produced staged readings of three plays (Having Our Say, Vita & Virginia, and Now I Am Your Neighbor). We helped sponsor two community events (DisOrient Film Festival, Eugene Children’s Film Festival), and we offered a scholarship to a summer film/animation camp to a young person of color through the Academic Achievement Center Foundation.

At the end of 2017, VLT and MVT decided to join forces, offering VLT an active community outreach tool, and giving MVT a home, a 501(c)3 for fund raising, and the support of one of the oldest continuously running community theatres in the country (VLT has been producing plays in Eugene, OR every year since March, 1929).

In April 2018, MVT partnered with Trans*Ponder to present a staged reading of Transfigurations – a 1998 play that explores the lives of Oregonians who identify as transgender. And, in the same event, we introduced the first annual Trans Monologues, bringing up-to-date the stories and experiences of our local Transgender/Gender non-conforming community. And in the fall of 2018, MVT, VLT, and the University of Oregon joined together to present Pilgrims Musa and Sheri in the New World by Yussef El Guindi, directed by Michael Malek Najjar.

The following year (2019) saw our first Spanish language play, La Gringa by Carmen Rivera, and our first commissioned work, At Winter’s Edge by Rachael Carnes, creating a unique multicultural holiday play. And now, in the midst of Covid-19, we we are looking at a shift to digital, starting with Marty Kingsbury’s tender love story, The Scent of Tulips. 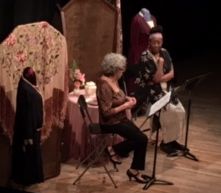 Sharon Rosalyn Sless and Donella-Elizabeth Alston in Vita & Virginia (May, 2017)

Going forward, we will be focusing on Black theatre (a passion of MVT Co-Founder, Stan Coleman), telling stories that can help continue important community conversations.

Please use the email address below to sign up for our periodic e-newsletter or to contact us with ideas for future productions, related events you’d like us to help promote, and any messages of encouragement you’d like to pass along. 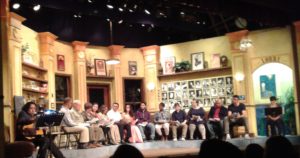 An enhanced audiobook – listen, read along, experience the story

“I look up at the window to the dark trees at the end of our meadow and the Green Mountains behind them and think to myself: this is the end of a long line. How much do my grandchildren know about the beginnings of this line and its progress up to this point? How much do they care to know? I believe that sooner or later they will want to know. Tonight, I will try to give them some of the essentials.”

Thus begins the memoir of Emil Offenbacher, celebrated antiquarian bookseller, born a German and a Jew, coming into adulthood in Europe as the Nazis rose to power. The memoir chronicles Emil’s escape from Europe with his wife, Anne, and young children, Claude and Florence.

Narrated by our own Claude Offenbacher (bringing his father’s voice to life), with an introduction by Emil’s grandson, Matthew, this memoir now takes the form of an enhanced audiobook, complete with family and historic images, and scored with beautiful classical piano music by Schumann, Handel, Liszt, and Bach.

Produced by Minority Voices Theatre and the Virtual Little Theatre, this memoir, precious to the Offenbacher family, will now be shared with everyone – available on the VLT YouTube channel beginning in August 20. Details about how to view it coming soon.

With Her Own Wings

Springfield playwright Dorothy Velasco celebrates voting rights history with a new play about Oregon’s leading suffragist, Abigail Scott Duniway. With Her Own Wings, Velasco’s 12-minute play inspired by Duniway’s life, follows the final years of her 42-year crusade to gain the vote for Oregon women in 1912.

When she began her campaign, Duniway had no idea it would require fierce but witty combat with her brother, Harvey Scott, longtime editor of The Oregonian. From her standpoint, his life’s mission was to thwart her.

The show is streaming free of charge on Very Little Theatre’s YouTube channel.

The script of With Her Own Wings will be included in the international online playwriting project, 365 Women a Year.

In partnership with the Community Alliance of Lane County, MVT is proud to present

Woven together by playwright Nancy Hopps, in collaboration with the We Are Neighbors creative team

Now available as a virtual event!

We Are Neighbors, the 30-minute touring version of the play Now I Am Your Neighbor, explores the experiences of immigrants living in Lane County. We Are Neighbors is available to be presented virtually for schools, places of worship, and community events.

For more information and to book a performance, please contact neighborsplay@calclane.org

In this 10-minute play, we meet Maria Felix, the queen of classic Mexican film, who unexpectedly encounters her ex-husband, Agustin Lara, the equally famous composer of romantic music, at a Mexico City airport. They resolve their unfinished business with edgy, affectionate wit.

MVT will be working this year to create and nurture a Spanish language theatre project in Eugene/Springfield – dedicated to our friend Dagmaris Cabezas, whose dedication to LatinX voices in local theatre inspired much of the work at MVT and who passed away suddenly on November 12, 2019.

During and after our first Spanish language production, La Gringa (November, 2019), we saw and heard the excitement and emotions it created. We were asked to do more, and we accept that challenge.

We will be spending time during the shut-down exploring how to do this – who we might partner with, and what shape it might take. Watch for our next live Spanish language productions as soon as theatres are permitted to open again.

Thanks for all your support these past few years! More to come!

Check back for more events as they get added to our season.